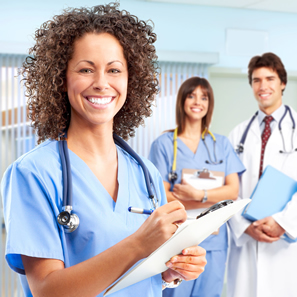 The average woman enters menopause at around age fifty-one, but many women start to have hot flushes and other symptoms much earlier. On the other hand, some women continue to have menstrual periods into their late fifties and even early sixties. It’s difficult to predict at what age menopause will occur in a woman although heredity plays a role – and factors such as smoking can lead to an early menopause.

Wouldn’t it be nice if you could predict when menopause will occur long before it happens? This would allow a woman to better plan her reproductive life – and know when she’s running out of time to successfully conceive. The good news? Scientists have recently developed a new menopausal blood test that’s completely different. It can actually predict menopause and approximately when it will occur years beforehand.

Up until now, menopausal blood tests have centered around checking levels of hormones produced by the ovaries and brain such as FSH, LH, and estrogen – which are associated with healthy ovarian function. These tests can tell a woman whether she’s entering menopause, but only after menopausal changes have begun. Scientists have now developed a new test that measures ovarian function – and allows women to predict when they’ll go through menopause while they’re still in their early twenties.

This new menopausal blood test measures levels of a hormone called anti-Mullerian hormone, or AMH. This hormone is a general marker for ovarian function. Women likely to undergo an early menopause will have lower levels of this hormone in their bloodstream. By measuring blood levels of AMH and comparing it to statistical charts, researchers can predict the approximate age of menopause.

How accurate is this menopausal blood test for predicting menopause?  When they tested it on sixty-three women, they were able to predict the age of menopause within four months. Keep in mind that this test doesn’t measure fertility. Fertility can decline years before the onset of menopause – but it could provide useful information that would make family planning easier.

This menopausal blood test is still in the testing stage and probably won’t be rolled out for at least several years until all of the data becomes available – but it could be a useful planning tool for women. Stay tuned for more information about this new blood test to predict menopause.